In its annual meeting 2013 the Board of the International Kodály Society granted Honorary Membership to
Mrs Ildikó Herboly Kocsár of Hungary. 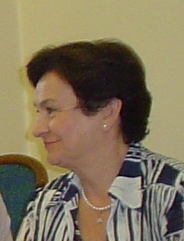 Ildikó Herboly Kocsár plays an outstanding role in realizing the educational principles of Zoltán Kodály in Hungary and wherever she teaches around the world. Ildikó has experience on all levels of music education. Since 1968 she has been a professor and conductor at the Teacher Training Institute of the Liszt Academy; later on, she became the head of the Theory Department; from 1968-76, Ildikó she supervised all of the music primary and secondary schools in Budapest. Then, from 1976-87, she was professor at the Zoltán Kodály Pedagogical Institute of Music in Kecskemét, and from 1970-87 she taught and lectured at all of the special Kodály Seminars in Kecskemét. From 1978-79, she co-directed the Music Department of the International House in Budapest, and from 1988-89 she co-directed the Vigadó-Redoute International Music Courses.

Among her many music publications, perhaps the most important are: Teaching of Polyphony, Harmony and Form in Elementary School (Published by the Zoltán Kodály Pedagogical Institute of Music, Kecskemét, 1984) and Music Should Belong to Everyone” – 120 Quotations from Kodály’s Writings and Speeches (Published in 2002 by the IKS). Ildikó served on the IKS Board as a Director from 1999 to 2007.