The Fukushima Kodály Choir and their distinguished conductor Miyako Furiya released a new DVD, which consists of two parts.

The first part is only the 27 choruses for equal voices of Béla Bartók, while the second part is a complete recording of the concerts of August 11th and 12th 2008, when the Fukushima Kodály Choir performed the pieces in Tokyo and Fukushima with the Hungarian conductor Gábor Ugrin. It also contains Japanese explanations and captions of the whole text. Finally, as an encore, they sang Kodály’s Esti dal.

This DVD is available at the price of US$30, including postal cost.

To order, please go to the following page: 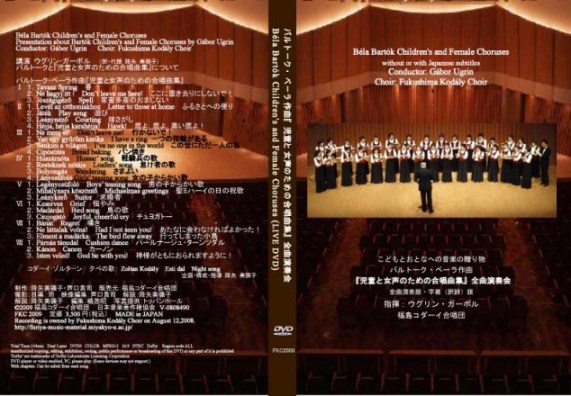 Foreword to the Japanese edition

Béla Bartók’s 27 choruses for equal voices are masterpieces of the Hungarian choir repertoire. They do not only reflect the soul of the nation but hold general human values and virtues. Music and lyrics are at once traditional and modern, so the whole series of the choirs in question contains everlasting values, with an artistic up-to-date timeliness.

Furiya Miyako is a most distinguished interpreter of those Béla Bartók choirs. Her thorough knowledge of the essence of Hungarian music is due to her long-time experiences at the sources of the treasures of Hungarian music literature in all respects. The performance of her choir is on a top level, recognized by many Hungarian musical experts and music critics. The interpretation of the 29 choir compositions is in contest with the best Hungarian ensembles in our time.

Conductor Prof. Gábor Ugrin has already directed the Kodály Choir a number of times. He is one of the most outstanding Hungarian choir conductors, who teaches at the Béla Bartók Conservatory and the Ferenc Liszt Academy of Music in Budapest. Prof. Ugrin has given lectures all over the world, in Europe, in America and in Asia. He is a Board Member of the Hungarian Kodály Society. His presence in Japan is very significant, as he is an authentic interpreter of Béla Bartók 's famous choir works for equal voices.