The OAKE Lifetime Achievement Award is given to the rare person whose impact upon Kodály music education transcends that of what might be considered an outstanding educator, administrator, or researcher. In 2022 this award was given to IKS President Dr. Jerry L. Jaccard, presented by OAKE President Donna Menhart. 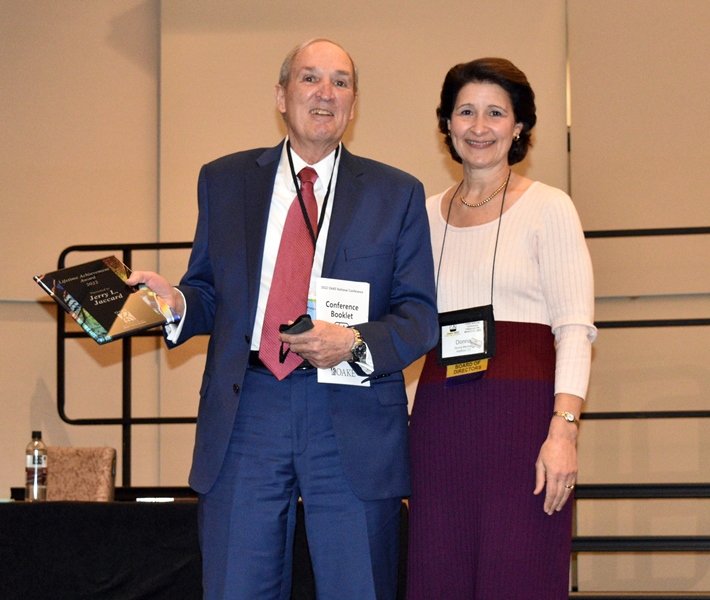 Dr. Jerry L. Jaccard was an Associate Professor of Music Education at Brigham Young University in Provo, Utah 21 years where he founded the InterMuse Academy Kodály certification program as well as established an elementary music degree program. Dr. Jaccard volunteered innumerable hours teaching in elementary schools, which led to the establishment of at least 13 full-time, salaried, and benefitted music teacher positions in the Provo City School District, all of whom are OAKE Kodály-certified. He helped charter the first student chapter of OAKE (Organization of American Kodály Educators) and hosted the OAKE National Conference in 1996, which led to establishing UFOLKS (Utah Fellowship of Local Kodály Specialists). Currently, Dr. Jaccard serves as the President of the International Kodály Society and is Co-Lead Editor of the IKS Bulletin. Regarding research, Dr. Jaccard has translated Zoltán Kodály's last book now awaiting publication by Mrs. Kodály, penned extensive articles for the Kodály Envoy and the IKS Bulletin, served as co-editor for Intersections: Music, Tradition, and Education as part of the IKS László Vikár International Forum for Folk Music Research, and assumed the role of biographer for the masterpiece A Tear in the Curtain: The musical Diplomacy of Erzsébet Szőnyi: Musician, Composer, and Teacher of Teachers. He either wrote, co-authored, edited, contributed chapters to, or translated over 20 books. I could continue outlining his career, but will instead allow words from his nominators to speak to his tremendous contributions.

"The man is indefatigable in both his dedication to the betterment of those within his influence and his generosity to those who often need it most. He has dedicated his life to the Kodály movement in America and throughout the world, and it is now only left for us as an organization to acknowledge him for it."

"Because of his sacrifice of time over 300 teachers have become Kodály certified and are blessing the lives of their own students through the training they received. Because of his great sacrifice and efforts, InterMuse Academy celebrated its 25th year anniversary in 2019."

And finally... "In a paper delivered in 1999 at the International Kodály Symposium in Kecskemét, Hungary, Dr. Jaccard said: 'The marvellous tapestry begun by Kodály is not yet complete, and that is why he put it into our hands to finish.' Jerry Jaccard has added immeasurably to that tapestry."

As Dr. Jerry Jaccard makes his way to the stage, please join me in applauding this educator who has clearly left an indelible mark upon the state of American Kodály music education.