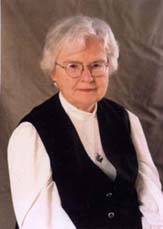 Erzsébet Szőnyi, whose name in the world has over the years coincided with the name of Zoltán Kodály, passed away this morning. During her long life Erzsébet Szőnyi worked tirelessly for the most authentic transmission and the high-quality application of Zoltán Kodály’s artistic and pedagogical principles.

She met Kodály when she was still a member of the Erzsébet Szilágyi Grammar School choir. At that time Kodály's interest was already primarily focused in the field of Hungarian music education, and in particular on the reform of Hungarian school music education. She studied folk music in Kodály’s class at the Academy of Music, and in 1945, during the Kodálys extended stay in the countryside, she took over her master's classes for a whole academic year. According to her own confession, the pedagogical experiences of the months spent at the Conservatoire in Paris during the 1947-48 academic year, to which Kodály very much encouraged her to obtain, further strengthened her conviction that in Hungary the path stoned by Kodály should be followed.

The start of her university teaching career coincided with the start of the Hungarian solfege education reform based on Kodály's principles. As a solfege teacher at the Academy of Music, as well as her experiences teaching at the preparatory classes of the Academy helped her to gain a wealth of experience in teaching solfege from beginning to advanced level.

All of these experiences are summarized in the four volumes of Musical Writing and Reading published in 1954, to which Kodály wrote a preface at Szőnyi's request. For the end of Lesson 100, Kodály himself composed a three-part singing exercise that would later become No. 29. of the Tricinia volume. The book has been translated into English, Japanese, Italian and Portuguese languages as well.

In her role as a university professor and Chair of the Music Education and Choral Conducting Department at the Liszt Ferenc Academy of Music for more than two decades, and as a result of her international activities as well as her numerous scientific publications about Kodály-inspired music education, she became the most prominent heir to Kodály’s music pedagogical legacy both in Hungary and throughout the world.

Her pedagogical, creative and public lifework remains an inspiration for many generations following hers.