Who was Eva Andor 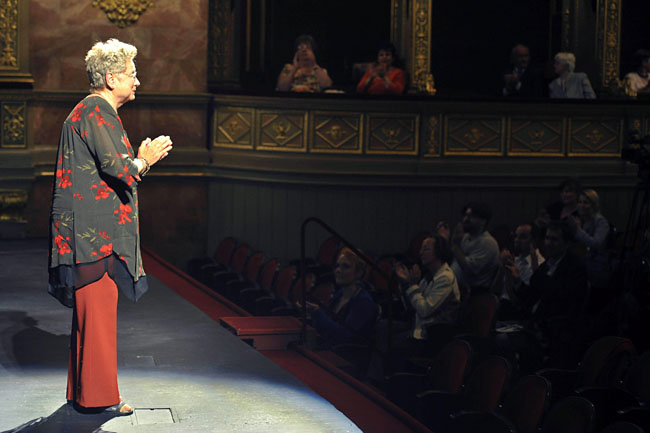 It was in the middle of 1950’s when I met Eva Andor for the first time. She was a blond pony-tailed girl, singing solo in the school choir conducted by Ilona Andor, one of the very best choirmasters of the time. Evidently, Eva was "the” soloist whenever it was needed in a piece.

Our choir was the very first one to be named after Kodály, and we had several concerts in the presence of the Maestro. Eva was remarkable for her wonderful voice and crystal clear intonation. This way, she called the attention of Kodály himself as well.

During our studies at the Liszt Academy of Music, we became close friends with her.

Due to her appearance and musical talent, she was given a major role in the folk opera "János vitéz” in the open-air Summer festival of Szeged in 1959. The performance was also recorded by the Hungarian television as one of their very first experimental transmissions. Her huge success in the role of Iluska marked the start of her career. She changed her original family name (Prácser) for the better-sounding Andor, in honour for our beloved former choir master and teacher Ilona Andor, whom Eva regarded her second mother.

Upon her graduation, she became a soloist of the Hungarian State Opera, and she never left it until her retirement. She was happy to sing the nicest roles of the opera literature, such as Margaret (from Faust), Pamina, Manon Lescaut, Bess (from Porgy and Bess), Woglinde, Nedda and so on, as well as presenting her roles the two Kodály pieces, Háry János and the Spinning Room on stage.

In addition to opera roles, she sung several oratories and masses (Haydn, Mozart, Beethoven, Brahms, Verdi). She never forgot her roots, thus she performed Kodály’s Te Deum and songs by him with great enthusiasm.

In the 1960’s, we spent a few years in Berlin with my family. Eva’s career was at its peak at the time. She came to visit us. One day she accompanied me to my singing lesson, where she met my teacher. Professor Dagmar Freiwald-Lange (chairperson for the department of singing of the Berlin Music Academy).Eva was astonished by the method how the professor was working with her students. These observations made such an impression on Eva that she asked Prof Freiwald-Lange to come to Budapest for a master course. This first course was followed by several others at the Liszt Academy over the years. Her lessons inspired Eva to start another career: teaching voice training. She became a professor of the next generation of singers. Her strictness was balanced by humanity and love for the students. Eva has received several awards such as the Liszt prize and the Pásztory Ditta prize.

In her private life, she always was a cheerful, temperamental woman. She became part of our family, participated in all of our major family events. We also made several trips together, both professionally and privately. For almost 20 years, we used to teach together at the Summer Kodály courses of the British Kodály Academy. We knew each other very well, and could count on each other any time. Eva was a gifted and humble musician.

I will never forget the sound of her voice at the and of Kodály’s Te Deum. She is singing with the heavenly choir "in eternum” now. But most of all, I am mourning my best friend.