The William and Flora Hewlett Foundation has granted Holy Names University $75,000. These funds will be used to update the American Folk Song Collection website developed by the University’s Kodály Center for Music Education. The website was originally created with the support of a previous foundation grant, and is the only site with recordings of traditional folk songs and their transcriptions.

“The American Folk Song Collection is a very rare website that has remained important to its constituency despite having a user interface that has not been updated since the site’s creation 10 years ago. We are planning on bringing critical updates to the site in both its technical structure and in its content,” said Anne Laskey, director of the Kodály Center for Music Education. 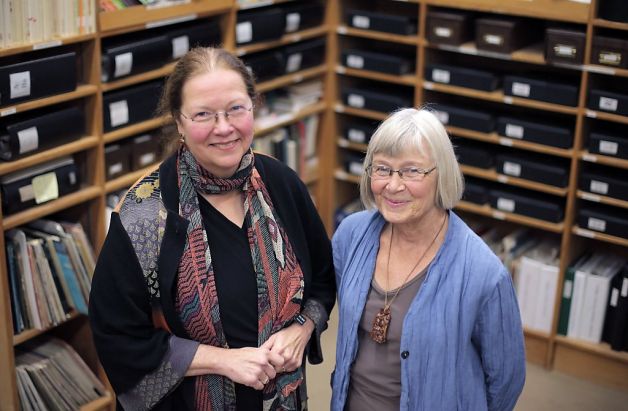 Anne Laskey, (right,) the Director of the Kodaly Center, and Gail Needleman, Lecturer in Music,
stand in the area where the American Folk Song Collection is stored at Holy Names University.
(Photo: Carlos Avila Gonzalez, The Chronicle)

The grant will be utilized to make a modern, newly designed website that allows users to access various forms of content using a wide range of platforms, including desktop computers, tablets, and phones.

The song database will also double in size from 350 songs to more than 700 songs. Songs that are underrepresented on the site will be added, broadening the site’s coverage of geographical regions, ethnic groups, and song types—for example, sea chanteys, spirituals, and ballads. New material will include Spanish songs and songs from the Library of Congress.

In addition, a new music curriculum is being developed for grades one to three that will provide learning objectives, songs for each lesson, and references and links to the site. “This will be a major enhancement to the educational value of the site,” Laskey said.

The Kodály Center for Music Education at Holy Names University (HNU) received a $10,000 grant from The Hungary Initiatives Foundation to support the continuation of visiting Hungarian master teachers.
http://www.hnu.edu/news/2014/08/the-kodaly-center-for-music-education-receives-10000-grant